Isaiah 42:1-9 | "1 Behold my servant, whom I uphold, my chosen, in whom my soul delights; I have put my Spirit upon him;he will bring forth justice to the nations. 2 He will not cry aloud or lift up his voice, or make it heard in the street; 3 a bruised reed he will not break, and a faintly burning wick he will not quench; he will faithfully bring forth justice. 4 He will not grow faint or be discouraged till he has established justice in the earth; and the coastlands wait for his law. 5 Thus says God, the Lord, who created the heavens and stretched them out, who spread out the earth and what comes from it, who gives breath to the people on it and spirit to those who walk in it: 6 "I am the Lord; I have called you in righteousness; I will take you by the hand and keep you; I will give you as a covenant for the people, a light for the nations, 7 to open the eyes that are blind, to bring out the prisoners from the dungeon, from the prison those who sit in darkness. 8 I am the Lord; that is my name; my glory I give to no other, nor my praise to carved idols. 9 Behold, the former things have come to pass, and new things I now declare; before they spring forth tell you of them.""

DREW: Okay. Let’s move onto the fourth point. Here the Lord is declared the creator of all things, of the universe and of people. Now, this is the same Lord who called and equipped the servant Jesus. He created all things, inanimate and animate objects, the galaxies, the sun, the moon, and all people and everything that comes from the earth. Verse 5, “Thus says God, the Lord, who created the heavens and stretched them out, who spread out the earth and what comes from it, who gives breath to the people on it and spirit to those who walk in it.” Think about that one verse. Now, the rest of scripture in many places affirms that the God of the Bible, the Lord, is the creator of the heavens and the earth and of people, but in this one verse it’s just stated. It’s not argued. There’s no alternative given. There’s no explanation needed according to God. In fact, many questions are answered. Think about the questions that the non-Christian unbelieving world asks all the time or the number of books and even learned articles and speeches that have been given. Where did the universe come from? Where did people come from? Think of that. But here, according to God, people have inherent value, they’re made in God’s image -- if we take the rest of scripture -- and they’re worthy of dignity and respect. The universe is God’s handiwork; “He knows all the stars by name,” Psalm 147. These are huge heavenly bodies, billions of galaxies, trillions of stars, and He created them all. In this one verse, think about how this one verse answers so many of the problems and questions that the unbelieving world has with respect to origins, origin of the universe, origin of the human race. Jesus is the creator. Here in verse 5, “Thus the Lord God said, who created the heavens and stretched them out.” Listen to Colossians chapter 1, verse 16 in the New Testament speaking about Jesus, “For by him all things were created, in heaven and on earth, visible and invisible, whether thrones or dominions or rulers or authorities -- all things were created through him and for him.”

So here is my first question: How does it help us to know the origin of the universe and of human kind? How does knowing the answer to those things help you?

PENNY: I’ll just say right off the bat because there is something so much bigger than you in this world that has broken in and made you aware of that. But, I mean, just understanding that you are not as big as you think you are and neither is the most powerful person that you can imagine or comes to mind. God is always bigger than anything we see and anything we don’t see. It puts it all in perspective.

NANCY: But, you know, there’s something incredibly comfortable about that. I mean, it just brings me comfort to know that there is something so much greater and that no matter what occurs God’s in control, because He created everything. And to me it just brings an immense amount of comfort. I’m not out here all by myself.

CAROLYN: And then it makes you wonder why can’t the unbeliever or other people see what we see? And then we have to go deeper and realize that the Spirit of God has not been put in their heart for them to acknowledge what is in the Bible. And that’s when I know I get impatient.

CAMILLE: It also helps eliminate the fear. Every time fear takes over or worry takes over we know that, oh, just let it go, give it to God. I mean, whatever the outcome is going to be we have no control over. We have to let it go, let God, and just accept whatever the circumstances are and know that whatever the outcome is going to be is the right one. And that is a blessing for us, because we know that we can rely on Jesus, that He’s always there for us, whereas someone who hasn’t accepted Him is so lost and so frightened and they have no one. So we’re just a blessed bunch. 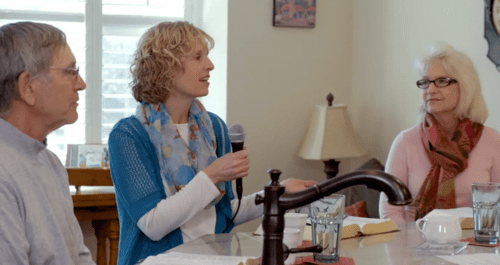