Isaiah 42:1-9 | "1 Behold my servant, whom I uphold, my chosen, in whom my soul delights; I have put my Spirit upon him;he will bring forth justice to the nations. 2 He will not cry aloud or lift up his voice, or make it heard in the street; 3 a bruised reed he will not break, and a faintly burning wick he will not quench; he will faithfully bring forth justice. 4 He will not grow faint or be discouraged till he has established justice in the earth; and the coastlands wait for his law. 5 Thus says God, the Lord, who created the heavens and stretched them out, who spread out the earth and what comes from it, who gives breath to the people on it and spirit to those who walk in it: 6 "I am the Lord; I have called you in righteousness; I will take you by the hand and keep you; I will give you as a covenant for the people, a light for the nations, 7 to open the eyes that are blind, to bring out the prisoners from the dungeon, from the prison those who sit in darkness. 8 I am the Lord; that is my name; my glory I give to no other, nor my praise to carved idols. 9 Behold, the former things have come to pass, and new things I now declare; before they spring forth tell you of them.""

It pointed to who Jesus was. If we understood or the first century people understood the Old Testament when they saw Jesus opening the eyes of the blind, they would have said, ‘this is the servant of God from Isaiah 42.’ Some did, some didn’t. Mark 10:46-52, “And Jesus and his disciples came to Jericho. And as he was leaving Jericho with his disciples and a great crowd was with him, Bartimaeus, a blind beggar, the son of Timaeus, was sitting by the roadside. And when he heard that it was Jesus of Nazareth, he began to cry out, “Jesus, Son of David, have mercy on me!” And many rebuked him, telling him to be silent. But he cried out all the more, “Son of David, have mercy on me!” And Jesus stopped and said, “Call him.” And they called the blind man, saying to him, “Take heart. Get up; he is calling you.” And throwing off his cloak, he sprang up and came to Jesus. And Jesus said to him, “What do you want me to do for you?” The blind man said to him, “Rabbi, let me recover my sight.” And Jesus said to him, “Go your way; your faith has made you well.” And immediately he recovered his sight and followed him on the way.” So this man was blind; he recovered his sight. That was his request; he wanted to be saved from his blindness. Jesus healed him, He said, “Go your way,” and then he followed Jesus. That’s critical, because he made the request, he was healed, then Jesus said, “Go your way,” and he followed Him. What does this prove? It proves that Jesus was the one who would open the eyes of the blind. That’s one of the things the servant did. Now, it really healed Bartimaeus, whose name means son of uncleanness, but he was made whole in Jesus.

An interesting thing about Bartimaeus is when he was healed -- remember when Jesus healed the lepers? He healed ten lepers, nine never said thank you; they never came back. One came back and fell before Jesus. It was like he realized that he was not only healed, he knew who healed him. But Bartimaeus here, once he was healed, Jesus said, “Go your way,” but Bartimaeus didn’t go his way, he went Jesus’s way. He was healed and then he followed Jesus.

That’s a great thing. Anybody who’s truly healed spiritually, who has their eyes opened like the Apostle Paul on the Damascus Road -- go back and read Acts chapters 8 and 9 -- he saw this bright light, brighter than the noon day sun, he was knocked off his horse, and something like he was blinded for three days. It was a physical blindness that the Lord used, amongst other things, to show him the spiritual blindness that had possessed him and owned him for his whole life as a very, very intelligent pharisee.

So think of Jesus in this sense: He opened the eyes of the blind. It’s a wonderful picture of being blinded and then being able to see. “I once was blind, but now I see.” It’s magnificent. It points to Jesus as the fulfiller of the servant in Isaiah 42, but also the one who enables people to really see with spiritual eyes of faith, who He is as Jesus Christ, both Lord and Messiah.

Now, some believers throughout history have been released from prison -- Peter was -- some haven’t. Jesus is saying, “Go and tell John what you hear and see: the blind receive their sight.” Think of that as prisoners coming out. These were prisoners. “The lame walk.” They were imprisoned by their condition. “Lepers are cleansed,” saying, “the deaf hear, the dead are raised, the poor have good news preached to them.” All of those people were prisoners in spiritual and physical dungeons, but, here, Jesus is going to bring people out of prison in that sense, from prison to freedom in Christ. “You shall know the truth” -- Jesus is the truth -- “and the truth shall set you free.” That’s what is going to set you free from the spiritual dungeon. “Are you the one who is to come or shall we look to another or for another?” And John, of course, would die in prison. He would lose his head because of his ethical righteousness. We could look into that a little bit more, but you can just read Matthew’s Gospel. So John is thinking, why am I still in prison? And Jesus is saying, I’ve come to set people free from another kind of prison. You’re going to stay in prison for now. I’ll heal some people, but you will not be released from prison, that’s not what I’m talking about here.

So what stands out to you about the healing ministry of Jesus based on that last point?

DON: I guess more that the healing was pointing to Christ. It wasn’t really about the healing so much as it was the people recognizing who Jesus was. I mean, the healing was important to them, but what He really wanted was them to look and see that he was the Son of God and that things were going to change.

DREW: That’s right. The physical need is important, but the spiritual need is much, much greater, isn’t it?

PENNY: I think equally it’s interesting that John, who was of the light, but still didn’t understand the full implications until he asked the question, very much like anybody would, well, why am I still in this dungeon? And yet, his light, they tried to put it out and they did in a sense physically, but not eternally and not the light of his ministry preparing the way for Jesus. And I think that’s a great thing to think about as well is that John had to become less so that Jesus could become more. And so he knew his time was for a time and he was willing to go exactly where God wanted him to go and to remain faithful to the end.

PENNY: So it’s a beautiful picture.

NANCY: And, also, the physical healing of people, while it was very important, it was almost like a metaphor for the spiritual healing of people, which is so much greater. And word spread that Jesus was healing people of their physical infirmities, but the more important thing was that Christ was here to heal people of their spiritual infirmities.

Father, we thank you so much for the Lord Jesus, who was your servant as set forth in Isaiah chapter 42, verses 1 through 9. We pray that you would continue to speak to us, writing your word upon our hearts that in small, but very significant ways we would live humble lives, lives of service to one another and to the people of this world, that they might see the Lord Jesus Christ in us in some small, but yet very significant way. We pray in His name and for His sake, amen. 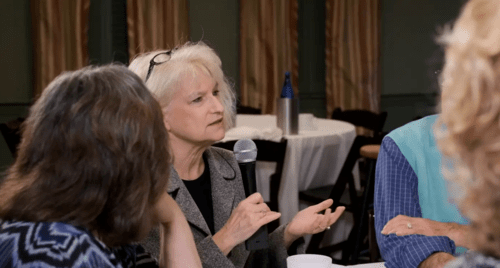