Exodus 17:1-7 | "1 All the congregation of the people of Israel moved on from the wilderness of Sin by stages, according to the commandment of the Lord, and camped at Rephidim, but there was no water for the people to drink. 2 Therefore the people quarreled with Moses and said, “Give us water to drink.” And Moses said to them, “Why do you quarrel with me? Why do you test the Lord?” 3 But the people thirsted there for water, and the people grumbled against Moses and said, “Why did you bring us up out of Egypt, to kill us and our children and our livestock with thirst?” 4 So Moses cried to the Lord, “What shall I do with this people? They are almost ready to stone me.” 5 And the Lord said to Moses, “Pass on before the people, taking with you some of the elders of Israel, and take in your hand the staff with which you struck the Nile, and go. 6 Behold, I will stand before you there on the rock at Horeb, and you shall strike the rock, and water shall come out of it, and the people will drink.” And Moses did so, in the sight of the elders of Israel. 7 And he called the name of the place Massah and Meribah, because of the quarreling of the people of Israel, and because they tested the Lord by saying, “Is the Lord among us or not?”

DREW: This is the second main point. So the rebellion of the people must be judged. They’re rebelling against the Lord here. The rod of judgement must be inflicted. So here’s the second point: The Lord himself steps in to take the rod of judgement the people deserve. He does this by identifying Himself with the rock. He takes the judgement blow that the people deserve. Exodus 17, versus 5 and 6: “And the Lord said to Moses, “Pass on before the people taking with you some of the elders of Israel, and take in your hand the staff with which you struck the Nile, and go. Behold, I will stand before you there on the rock at Horeb, and you shall strike the rock, and water shall come out of it, and the people will drink.”

Now, this is the only time in the scripture in which God brings himself before a human being for the purpose of judgement. Usually God is calling people to himself and He judges them. God is saying, I am going to stand on this rock and when you smite that rock, it is as if I am taking that rod of judgement and then out of this rock is going to flow water, because judgement must occur before blessing. Judgement has to occur before life.

So the God of Israel, again, is standing before Moses and Moses has his rod lifted up. The Lord commands Moses to strike the rock.The rock is identified with God in the song of Moses. Notice how in Exodus 17 the Lord is standing on the rock and Moses takes the rod and strikes the rock. We see God standing on it. He tells us that much. As we move on to Deuteronomy, though, the Lord is identified with the rock. It’s going yet a step further. Deuteronomy 32, verses 3 and 4: “Ascribe greatness to our God! He is the rock, His work is perfect, and all His ways are just.”

So there’s development here from the Lord standing on the rock to the Lord being the rock. It’s not just referring to the Lord as the rock in Deuteronomy 32:3-4 as something strong and stable and on which we base our lives, although that’s true, too. In the context of scripture, when Moses is saying in Deuteronomy 32:3-4, the Lord is our rock, we’re meant to harken back Biblically, and understand that word rock in its broader Biblical context.

There are two Psalms that commemorate this incident that occurred at Massah and Meribah. One especially is Psalm 78. Listen to this: Psalm 78, verse 15: Speaking of the Lord, “He split rocks in the wilderness and gave them drink abundantly as from the deep.” All right. Psalm 78, verse 20: “He struck the rock, so that water gushed out and streams overflowed.” We know that, but now in that same Psalm there’s a development. God becomes the rock, which received the judgement blow, then out of which flowed lifegiving water. That same Psalm, Psalm 78, verse 35: “They remembered that God was their rock.”

So you see in the same Psalm there’s the development that we saw from Exodus to Deuteronomy. God split the rock, God struck the rock, and then later in the Psalm in verse 35, God was their rock. What’s the Psalmist doing? He’s showing that God somehow is receiving the blow of judgement that the people deserved when the rock was hit and once that judgement blow was afflicted, streams of water flowed out of that rock.

Couple of questions here. Is it becoming clearer to you, without stealing my thunder, that God the rock took the judgement the people deserved then lifegiving waters flowed?

DREW: Okay. That’s the point. Now, here’s another point that we’re going to open up: How does the Old Testament strengthen our faith and increase our understanding of what you know from the New Testament?

DREW: Okay. And maybe this is a question we can revisit again at the end of the lesson when we see how the New Testament elaborates and expands upon what’s been revealed in the Old.

PENNY: I think for me when I think about that God was testing the hearts of His people and it makes us realize that we all fail on some level and how gracious and merciful God is that He took the judgement for us. And so when we fail, we can know we’re forgiven and that He doesn’t hold it against us and our past is not our present and we can move on, because Christ’s blood covers us, just like the rock, the living water that flowed. 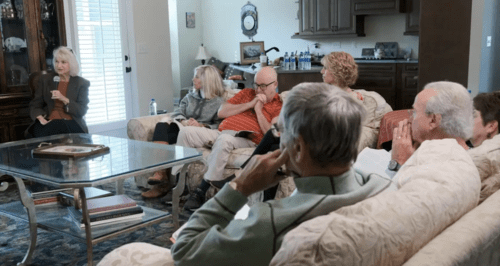