Exodus 17:1-7 | "1 All the congregation of the people of Israel moved on from the wilderness of Sin by stages, according to the commandment of the Lord, and camped at Rephidim, but there was no water for the people to drink. 2 Therefore the people quarreled with Moses and said, “Give us water to drink.” And Moses said to them, “Why do you quarrel with me? Why do you test the Lord?” 3 But the people thirsted there for water, and the people grumbled against Moses and said, “Why did you bring us up out of Egypt, to kill us and our children and our livestock with thirst?” 4 So Moses cried to the Lord, “What shall I do with this people? They are almost ready to stone me.” 5 And the Lord said to Moses, “Pass on before the people, taking with you some of the elders of Israel, and take in your hand the staff with which you struck the Nile, and go. 6 Behold, I will stand before you there on the rock at Horeb, and you shall strike the rock, and water shall come out of it, and the people will drink.” And Moses did so, in the sight of the elders of Israel. 7 And he called the name of the place Massah and Meribah, because of the quarreling of the people of Israel, and because they tested the Lord by saying, “Is the Lord among us or not?”

DREW: The third point is we are guilty of sin, but Jesus the rock steps in, He is judged, and He receives the blow or the penalty that our rebellion deserves. Jesus is the rock. Listen to this from First Corinthians, chapter 10 in verse 4: The Apostle Paul rightly says of Israel in the wilderness -- this is New Testament -- that they Israel, “drank from the spiritual rock that accompanied them and that rock was Christ.” That’s who they drank from. They drank from Christ. In other words, Paul is saying there, if we connect it, that was Christ who received that judgement blow and then then living waters flow out of Him. That’s exactly what Paul is doing there and we should make the most of those connections, because they do increase our confidence in the scripture. Jesus is the rock who received the rod of our judgement on the cross.

I want to draw your attention to the Gospel of John, chapter 19 in verse 34, Jesus is hanging on the cross. Remember they broke the legs of both of the men who were being crucified with Him, but when the soldier saw that Jesus was already dead here’s what he did: “But one of the soldiers pierced His side with a spear, and at once there came out blood and water.” Now, Jesus is the rock; Paul says that. We’ve seen that from what we would call Biblical theology. He’s hanging there on the cross and He’s already dead and this soldier is taking a rod, a spear, and he thrusts it in Jesus’s side, probably pierced the pericardium, and after you’ve been dead there’s a separation between the clot and the serum and so you have blood and the appearance of water. The blood, the judgement blow, is that there has been death. There’s death. The rod of judgement. “Without the shedding of blood,” Hebrews 9:22, “there is no remission of sins.” Jesus receives the rod of judgement, the blood comes out, but there’s also water that comes out. Blood comes out of the rock, out of Jesus, because He takes our judgement for sin and then water comes out of Him to show after the judgement that Jesus takes in which He sheds His blood, the water of life is going to come. The judgement, the blood, and the death have to all precede the water and the life.

Listen to this. This is where the idea in Isaiah 53 -- and now we’re going to expand on this theme a little bit, 53 verses 4 through 6, this is that great prophecy that most people know of, the suffering servant: “Surely He has borne our griefs and carried our sorrows” -- think of the suffering substitute -- “yet we esteemed him stricken, smitten by God, and afflicted. But he was wounded for our transgressions; he was crushed for our iniquities; upon Him was the chastisement that brought us peace, and with His stripes we are healed. All we like sheep have gone astray; we have turned everyone to his own way, and the Lord has laid on him the iniquity of us all.” You see how the rock, Jesus, is now interceding and receiving in himself the judgement blow that was due us. That’s all about the suffering and death of the divine substitute. That’s what Isaiah 53 is about. He also says in Isaiah 53:8, “He, Jesus, was stricken for the transgression of my people.” There you have it, again, if you go back to the Old Testament or Galatians 3:13. These begin to make even more sense now given Exodus 17:1-7. Galatians 3:13, “Christ redeemed us from the curse of the law by becoming a curse for us.” We deserve the curse, but the blow was inflicted upon the rock instead of upon the people. See how that’s carried through to the New Testament?

And one other, Romans 5, verse 8: “But God shows His love for us in that while we were still sinners, Christ died for us.” While the Israelites in the wilderness were still rebels and sinners, God stood upon the rock and took the judgement blow. See? While we were still sinners, Jesus Christ the rock hung upon the cross and took the judgment blow dying for our sins, shedding his blood, that we might enjoy new and everlasting life.

Why is Jesus’s substitutionary death important? Think of Jesus being the rock, struck with the staff of God. Why is that important to you?

PENNY: Just going off Nancy, we think about when Jesus was hanging on the cross He said, “Forgive them, Father, for they do not know what they do.” So the very sinners that put Him on the cross, who many He died for, it’s just remarkable when you think about the substitutionary death and what He endured for us and our sin. He took death, so we could have life. I mean, everything that He was, we weren’t, He gave us, so that we could live an abundant life and live with Him forever. It’s really beautiful.

DON: I see an incredible parallel between the Exodus passage and what Jesus did for us on the cross and that we mentioned earlier about the fact that God met the Israelites needs time and time again. They cried out, they complained, He met their needs. But going from the concept of they have a need, they’re crying out, they’re a belligerent people, and what does God do, but like a loving father He steps in and takes the blow. Based on that description, He takes the blow so that the blessing could flow. And just like the old Israelites, we find ourselves in the same boat crying out to God and God says, I’m going to do it again. And the only way to put an end to this, the only way to sanctify these people, is I’m going to send my son and this time He’s going to take the blow for the forgiveness of our sins and our belligerence and our anger and all those things that try to separate us from God. Once Jesus paid that price, that was it. We couldn’t be separated again.

DREW: Fantastic input. The next question -- I think you answered it -- how does Jesus taking the judgement blow for us make you feel? You know, in Corinthians Paul refers to Jesus as death and He says, “Thanks be to God for His indescribable gift,” and when I was listening to you share, that’s what came to my mind. It’s just indescribable. It’s God sending His son, it’s God coming down in the person of His son, and I love the Old Testament picture of it and that is that the servant, God himself, looked for someone to intercede. And you can just imagine looking this way, looking that way, and He couldn’t find anyone. So then it says, “He laid bare His holy arm,” which means He rolled -- it’s the image of rolling up a sleeve and I’m going to get about the business and intercede myself on behalf of my people and it’s powerful. Those kinds of metaphors are so so powerful. Anyway, that’s how it makes me feel. 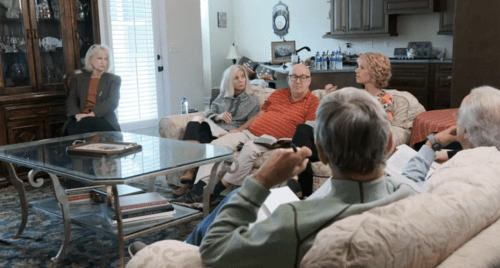