Mark 4:35-41 | "35 On that day, when evening had come, he said to them, “Let us go across to the other side.” 36 And leaving the crowd, they took him with them in the boat, just as he was. And other boats were with him. 37 And a great windstorm arose, and the waves were breaking into the boat, so that the boat was already filling. 38 But he was in the stern, asleep on the cushion. And they woke him and said to him, “Teacher, do you not care that we are perishing?” 39 And he awoke and rebuked the wind and said to the sea, “Peace! Be still!” And the wind ceased, and there was a great calm. 40 He said to them, “Why are you so afraid? Have you still no faith?” 41 And they were filled with great fear and said to one another, “Who then is this, that even the wind and the sea obey him?"

DREW: Let’s look at five, the final point, we’re going to look at some ways we minister to people who are in the middle of a storm. Now, the storm here could be relational, it could be emotional, it could be financial, spiritual, just a really, really hard time. One, of course, is prayer. Prayer to the one who loves us, who controls life’s storms, is with us, will see us through. We pray to the Lord on behalf of His people and that’s one way for us to fellowship with people in their sufferings, in their storms.

Another is presence, to identify with others in their trial or storm. It’s really the ministry of presence. Romans 12:15, “Weep with those who weep.” It’s not for us always to come in with answers. Remember I mentioned Job and his counselors, how his three friends did really well when they just sat with him. It’s when they started to talk that things went south for both Job and his friends. So spend time with people, be there for them. We have to be sensitive to know when they want company, when they don’t, but, I mean, we have to push through. If they don’t want company, they’ll tell us. We want them to know we want to be there for them.

The third is to provide tangible help whatever it might be. I’ve known people -- I remember going through a very difficult time in which a good friend of mine was like a chauffeur for me. He would pick me up and take me places I needed to go and I’ve seen that in church ministry a lot. People need help to the doctors, they can’t drive anymore, and so a church will work out a system in which people will rotate and take the one in need to meet their doctor’s appointments.

We also want to prevent the feeling of isolation. At the most difficult times in life, Satan will come to us and He’s going to try to convince us we’re alone and oftentimes we will feel alone in the midst of trials. Our feelings aren’t always accurate, but they can be very, very powerful. And we need the body of Christ to minister to us, to convince us in our experience that we’re not alone. That’s we’re not alone. And I think by being there for people and with people, praying for them, providing tangible help, what we’re doing is helping to inculcate a proper perspective without preaching at people. We’re there with people in the trials of life, in the muck and mire of life and that’s very critical.

I want to finish with this point: The storms of life will end when there are no more waves and there will be no more waves only when there is no more sea. Revelation 21, verse 1, the Apostle John, “Then I saw a new heaven and a new earth for the first earth had passed away and the sea was no more.” So there will come a time when we as the people of God, will be done with the storms of life and Jesus coming into the world and calming the storm on the Sea of Galilee was what you would call proleptic. It was anticipatory of the end when all of life’s storms will cease finally because of who Jesus is and what He came to do and what, in fact, did do for us. So that’s the final point, but any comments on the ways in which we help one another in the midst of life’s storms?

PENNY: Something that came to me as you were saying that with coming alongside people, so what we’re talking about is the voice. We give them voice, we use our voice to console, or it could even be on a social media platform like Twitter. And the example I’ll use is these horrible sexual abuse cases that are coming out in a particular denomination right now and it’s very widespread and I’m sure more will come, but what people are doing, what’s so beautiful, is they’re supporting these people that had no voice. They’re saying, ‘We stand with you. We agree that church leaders have abused you. We agree.’ And, I mean, they don’t even know these people, but because of the very fact they’ve been through such a devastation, they’re willing to use their voice on social media to support them and it’s really beautiful. And so we use our voice in any way we can to come alongside and to encourage even those who have been abused or who have been maligned or have gone through a storm that they need to process. Maybe it’s just they need to speak out. We encourage them to use their voice as well, because that helps to bring healing into their life and so no shame, no guilt, but just freedom to speak.

DREW: I had heard a really good point. It was by Diane Langberg and she said, ‘Is there hope for healing for people people who have been through trauma and abuse?’ And, she said, ‘yes, talking, tears, and time.’ The three things that will bring healing are talking, time and tears. According to what she said, how do we help? We listen, we weep with those who weep, and we give them time. Those are very wonderful ways to help people who are suffering through trials.

NANCY: Well, it’s interesting when you brought up talking, tears, and time and you were a few moments ago asking, how we can come alongside people and, it just makes me think of a number of people who I’m aware of in my life that have needed someone just to listen to them, because they are feeling isolated, they are going through a terrible situation, whatever it is. It might be a loss of a spouse, it might be a loss of a job, it might be any kind of emotional, financial, spiritual thing that they are going through and we feel helpless sometimes I think, because I think we as humans want to make it better for somebody. You want to do something and sometimes all you really can do is listen to them and just be there, as you said, the idea of just being present. I think that’s good for us to remember, because you can’t always in and of yourself make it better, but you can be there to support them and to also talk to them about the fact that God will help them come out on the other side. The first verse in chapter five, I think you were referring to that indicating that they got to the other side. And, again, a cursory reading of that story, I would just read it and go, ‘okay, so they got to the other side,’ but when you really delve into it and understand that the reason they got to the other side was because Jesus said, ‘we’re going to the other side,’ you can rely on that. And that’s a much deeper understanding of that passage, so thank you for that.

DREW: Anyone else? Okay. Well, let’s pray. Thank you for coming.

Father, we rejoice in the Lord. We thank you for the Lord Jesus Christ who calmed the sea, the wind, and the waves and in doing so showed himself to be the God of the Old Testament, the Lord God of all, the God of Israel incarnate. We thank you that He was with the disciples and He’s with us before, He enters the storms with us, He’s with us in the middle and after He calms life’s storms. We thank you Lord that the ultimate storm -- death -- He will see us through to the other side and to the resurrection of the body. We thank you for all the things in your word that we were able to read and discuss and I pray that you would write your truth upon our minds and hearts transforming us to live for you in all areas of life. In Jesus’s name, amen. 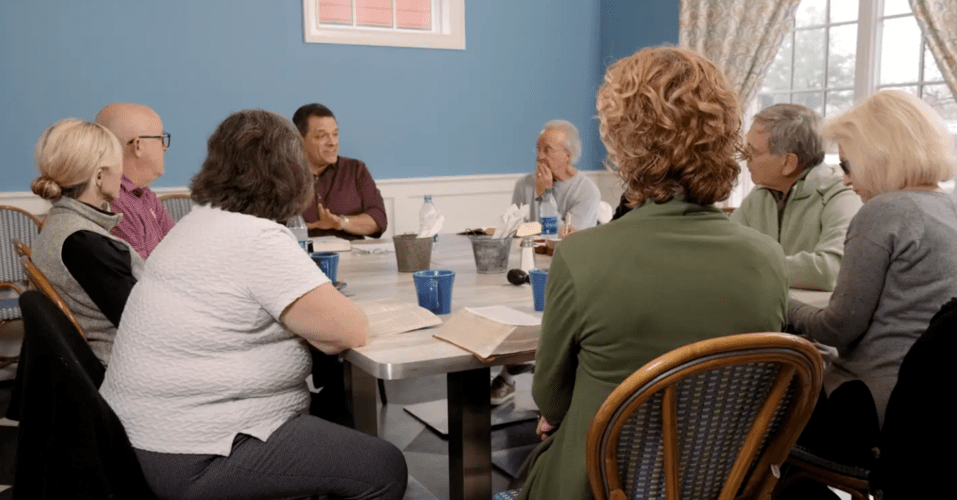