Mark 4:35-41 | "35 On that day, when evening had come, he said to them, “Let us go across to the other side.” 36 And leaving the crowd, they took him with them in the boat, just as he was. And other boats were with him. 37 And a great windstorm arose, and the waves were breaking into the boat, so that the boat was already filling. 38 But he was in the stern, asleep on the cushion. And they woke him and said to him, “Teacher, do you not care that we are perishing?” 39 And he awoke and rebuked the wind and said to the sea, “Peace! Be still!” And the wind ceased, and there was a great calm. 40 He said to them, “Why are you so afraid? Have you still no faith?” 41 And they were filled with great fear and said to one another, “Who then is this, that even the wind and the sea obey him?"

DREW: We’ll move onto number three. The great storm -- the wind and the waves -- did not wake up a sleeping Jesus, but the disciples did wake up Jesus, because of their reaction to the storm or because of the great storm going on within and among them and outside of them. Verse 37 and 38 -- and this is when we’re going to refer back to Psalm 46 also -- verse 37, “And a great wind storm arose and the waves were breaking into the boat so that the boat was already filling, but Jesus was in the stern” -- that’s in the back of the ship or the boat -- “asleep on the cushion and they woke him and said to him, “Teacher, do you not care that we are perishing?” Now, here’s what happens in these verses. There’s a great wind storm, the waves are breaking into the boat, the boat is filling with water. Then you move to Jesus who is in the stern, which is the back of the boat. He’s on a cushion and He’s asleep in the midst of the storm. The disciples woke Jesus, they called him “Teacher,” “don’t you care” -- isn’t that interesting. What do we do in the midst of life’s storms? Some people immediately say ‘don’t you care, Lord?’ “We are perishing.” Well, isn’t it amazing? We have a storm in life and at times we, too, think the Lord doesn’t care and the storm is going to kill us and nothing else could happen. Jesus calms the storm, then the disciples say, “Who then is this, that even the wind and the sea obey him?”

Now, turn to Psalm 46 and this should make sense as we go through it and hopefully we’ll see a little bit more about this Psalm in context. Psalm 46. I’m not going to read the whole Psalm; I’m just going to draw your attention to it. Verse 1, in verse 1 of Psalm 46, “God is our refuge and strength, a very present help in trouble.” The Psalmist is making the point that God -- he recognizes God for who He is -- God is our refuge and He helps us in trouble. Verse 2, “Therefore, we will not fear.” God is present with us in the midst of trouble, so we’re not going to fear. Verse 3, “Though its” -- the seas -- “the waters roar and foam, though the mountains tremble at its swelling.” So here the storm is coming now, but the Psalmist knows in the midst of this that God is his present help in this trouble. Verse 7, “The Lord of hosts is with us; the God of Jacob is our fortress.”

So what do we have here so far? We have the Psalmist acknowledging God and the Lord, that the Lord of hosts is with us, He’s our refuge and strength, a very present help in trouble. Well, there’s trouble. In verse 3, the waters are roaring and foaming, but the Lord is with us, so he’s okay; right? Well, verse 10, says this, “Be still, and know that I am God.” Now, the Psalmist can say that, “Be still, and know that I am God,” because he recognized that God was with him in the midst of trouble and because of that, he could be still. When we recognize that it’s God who’s with us in the midst of a storm, we have the opportunity and the ability to be still. But the disciples were fearful and were not still. Why? To them at this point, Jesus was Teacher -- Rabbi -- about whom they said, “Who then is this, that even the wind and the sea obey him?” So the disciples were not still or quiet in the storm like Psalm 46, because they did not yet know that God was with them in Jesus. That’s a key point, I think.

Jesus said to the storm, “Be still.” He had to quiet the storm outside of the disciples before the storm within the disciples was quieted and they could be still. He had to do that, because unlike the Psalmist who wrote Psalm 46, they didn’t recognize that God the Lord of hosts was with them in Jesus. See that? Does that make sense?

How about in our lives? Are our hearts still in the midst of life’s storms, because we know that God is with us or does He have to calm the external or circumstantial storms and say to them, “Peace! Be still!” for there to be stillness within us? Do you see what I’m getting at there? What do you think?

CAMILLE: I think initially we automatically go into the panic mode and then you take a couple of steps back and realize that you’re not in control, that no matter what the outcome is going to be, God is always in control and if we put our faith in that, we know that no matter what the outcome is, it’s the outcome that should have been. So we can’t try and change the circumstances to fit the needs that we want; we have to realize that it’s what God wants.

DREW: So you would say that some people do have a struggle more with this than others as far as looking at the storm and waiting for the Lord to calm the storm before they’re calm within. I think for me it’s a process. I’ve grown. God’s given me greater ability to remain calm in storms as time has passed. I still have a long way to go, but compared to where I used to be, He calms my heart comparatively sooner now than He used to.

JOHN: Based on my life and Don’s life and all the different ups and downs that we have to go through life, when you sit back and look at your past and see why things happened you know that He’s been in control. He really has been. He sets up your life and if you look back and see all the peaks and valleys and everything that you drag yourself through and really the outcome was all to the better. It’s to make you stronger in faith and it really does work out in the end.

NANCY: It’s interesting and there’s another verse in the Bible and I won’t quote it perfectly, but “Who can for a moment add any time to your life by worrying.” I mean, I can be a worrier. Through my life I have often worried about things and this particular story in the Bible has always meant an awful lot to me, because, you know, when I remind myself that God is in control and as Jesus was in control of the wind and the waves, the wind and the waves is a metaphor for all of the struggles that we go through in life. And it’s human, I think, to worry, to be concerned, but it’s important also to remember that you need to be still and let God be God, because even though you may not know where everything is going, you can’t see God’s plan, so you don’t know why you’re going through certain things or certain things are happening. But as John was saying, moments from now, years from now, it could be weeks from now, it could be years, you may see revealed to you why that was happening, but it is always important to remember that God is the one that is in control and like I like to say, ‘In the end, God wins.’ 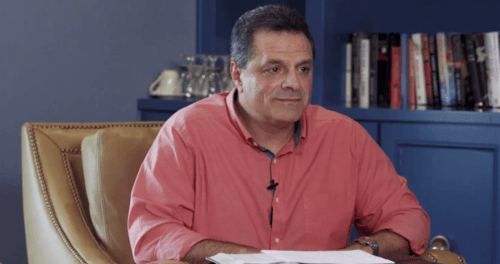